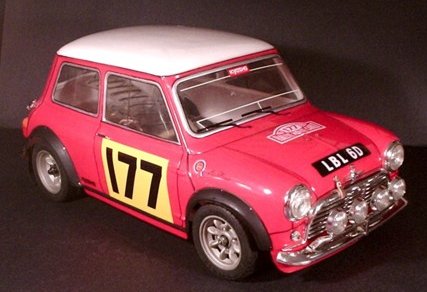 This car is the 1967 Monte Carlo Rally winning Cooper 1275 S driven by the Finnish driver Rauno Aaltonen. 1967 was the last of 3 official Monte Carlo wins by a Mini.

This model is one of a range of Mini’s produced by (probably!) Kyosho, since they have a license to reproduce models of the #177 Mini Cooper S 1967 Monte Carlo Rally
The engine compartment looks good and given that this model has been around for nearly 30 years, it is very nice indeed.

The starting device is untypical; a long teeth-covered stripe is pulled back and released; on the flywheel there are also teeth and a spring; When the stripe is pulled, the spring get tensioned and after release of the stripe the spring will pull the flywheel and start the engine… There is no carburator on the engine, only a valve for the fuel and a valve in the exhaust which is the accelerator. The ‘throttle’ is opening and closing the exhaust in stead of a carburator. 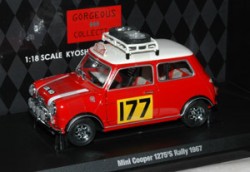 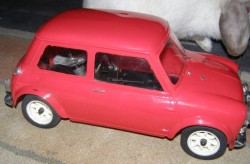 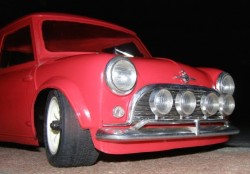 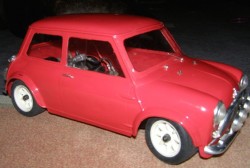 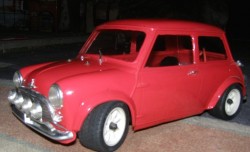 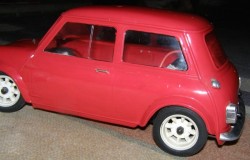 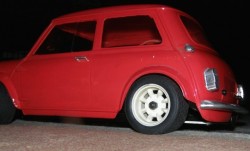 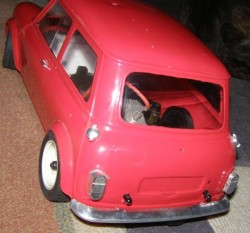 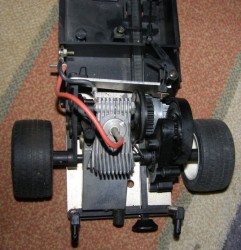 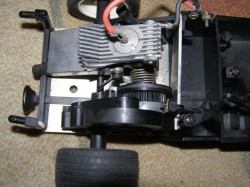 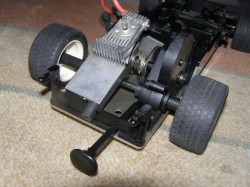 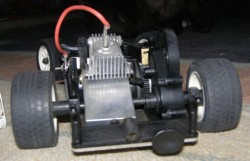 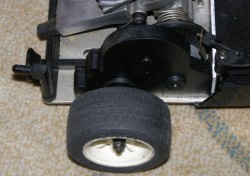 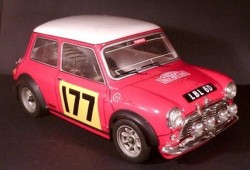 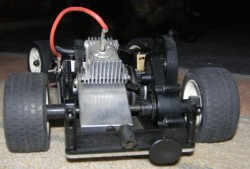 The Mini was first introduced in 1959, and was aimed squarely at the budget end of the motoring market. It’s advanced engineering included a transversely mounted 4 cylinder engine driving the front wheels, and a tiny body which nonetheless was able to accommodate four adults.

As it happened, it’s handling was terrific, and this prompted John Cooper (whose grand prix cars had won back to back drivers world championships with Jack Brabham in 1959 and 1960) to produce a sports version of the car with a highly tuned engine. These cars became known as Mini Coopers, and were a smash hit in the 1960’s. In competition form, they were successful in both circuit racing and rallying. Probably their most noticeable successes were in the famous Monte Carlo Rally. Mini’s won this event in 1964, 1965 and 1967. In fact, they also finished 1st, 2nd and 3rd in the 1966 event, but were disqualified due to a headlamp infraction, which many felt the French had contrived in order to prevent yet another clean sweep by the Mini.

When somebody has more information on this model; please contact us!